Rice is grown everywhere, but how the community cooks and eats depends on the spices available and the taste of those regions. Pulao is a rice seasoning that cooks rice with a visual appeal mixture of spices and other ingredients. No matter what the story is, every community has picked up this rice dish and made it their own. Moreover, pulao is something that everybody likes, adults and children, so you can make only one dish to serve the whole family!

Pakistani food is so rich in every sense of course. There is a wide variety in and every meal, such as a range of spices, variations of cooking techniques. The vegetable pulao is also served off as a vegetable biryani. And this is a frequent mistake made even by renowned restaurants, so the poor home cook cannot be blamed for not understanding the difference between the two dishes. First of all, biryani is primarily a meat dish. Variations of vegetables and fish can only be found in the recipe for pulao. The cooking method in both is also clearly different. Whereas the biryani rice is parboiled and drained and then cooked overheat, the pulao rice is boiled in the steam to cause the rice to consume the liquid.

Chana Pulao is a nutritious dish made of spicy chickpeas and rice. This vegan and gluten-free each meal can be eaten for lunch and dinner with salad, curd, or any ratio of your choice. Chana Pulao also makes up for a tasty lunch menu. If you’ve boiled chickpeas ready at hand, this chana pulao can be made in less than 20 minutes. The best part of this chana pulao is that it’s about helping you if you’re nearly out of fresh veggies. 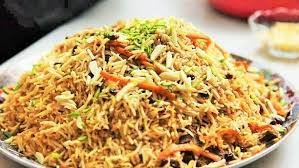 Pulao is a tasty dish made of basmati, meat or vegetables, spices, and herbs. It is slightly spicy and not as heavy as the Chicken Biryani. Generally, a Biryani is made by layering marinated meat and partly cooked rice. It is not only very easy to produce but very favorable and tastes delicious. There are so many ways Chicken Pulao can be fried, but mostly with water only. Chicken Pulao is better eaten with either Raita (Yoghurt) or Salan.

Beef/Mutton Pulao is a meat and rice dish, perfect as a main dish for lunch and dinner.  Most families make Masala Pulao with a stock (yakhni) of beef/mutton, this is a kind of modern version that satisfies the biryani and pulao sense of taste in one dish. This Pulao is a must-have rice dish every day. You can make this dish at home with Mutton or Beef on the Eid-ul-Adha. Or making it to the Parties.

A traditional dish, a mixture of vegetable pulao commonly known as sabzi pulao, is made with a mixture of rice and vegetables blended together. Mixed Vegetable Pulao (Sabzi Pulao) is there for you when you’re tired of eating heavy cooked dishes. A plate full of rice with a mixture of soft and tasteful vegetables, sabzi pulao is a wise pick for a dinner. It’s a delicious and nutritious meal to make for your family and yourself at any time.

Tips for making the best pulao:

Have to use a large pressure cooker so that all ingredients are well cooked.