One of Pakistan's most popular dish is Punjabi Kadhi Pakora. Deep-fried fritters (pakora) are dipped in a besan (gram flour) and spice-based yogurt sauce! 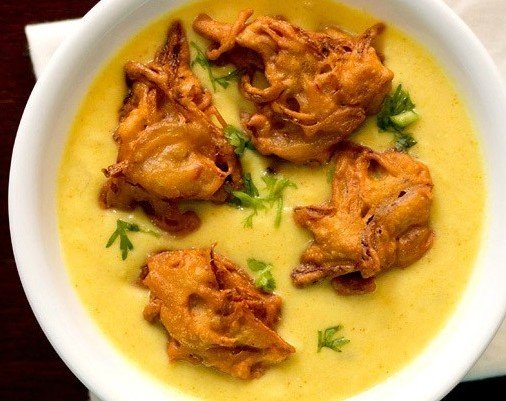 It tastes exactly like the one you get at your favorite dhaba.

Is both hot and flavorful.

Fritters made with onion and chiles are available.

The next day, it's even better!

The base of this Punjabi kadhi is comprised of two basic ingredients:

A yogurt (plain whole milk yogurt is what I prefer).

The yogurt and besan batter is tempered with spices before being cooked until it thickens and is entirely cooked. Once the kadhi is cooked, there should be no raw besan scent, and everything should just come together wonderfully. Kadhi is also derived from the term "kaadhna," which means "extended cooking on low heat." As a result, the longer you gently cook the kadhi, the better it will taste!

What is Kadhi Pakora?

Gram flour and yogurt are used to make a thick, soupy base. I promise it isn't as strange as it sounds! Pakoras that demand to be dipped in all of that delectable karhi. Overall, this is a wonderful cozy recipe. Plus, that gorgeous mustardy yellow color is ideal for the fall season.

DO YOU SERVE KADHI WITH ROTI OR RICE? THAT IS THE CONSTANT DISCUSSION.

This is, I think, a great dispute in my head. Do you have food debates? In Pakistan, kadhi pakora is served with roti by a large number of people. Scoop up the curries and pakoras with roti, eat it, be grateful, and so on. I'm not suggesting that kadhi with roti isn't delicious. Yes, it is. Because kadhi pakora is delectable in any form.

THE VALUE OF KADHI PATTA, ALSO KNOWN AS CURRY LEAVES. 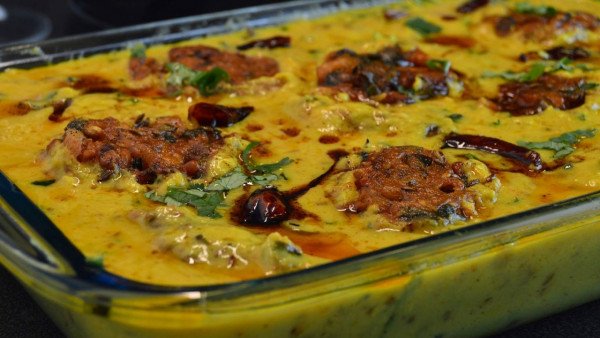 How to make Pakora Kadhi?

The recipe for Punjabi Kadhi Pakora. Punjabi Kadhi is a soupy meal with a lot of pakoras and a karhi patta tadka to cap it off. It's similar to a Pakistani dumpling soup, but with a completely different flavor profile. If you like pakoras in general, you should try my Aloo Pakora and Mixed Vegetable Pakora recipes.

In order to make the Kadhi Yogurt Base.

This is for the Pakoras.

A quarter teaspoon of baking powder.

To make the Tadka.

The Kadhi is being prepared.

Combine the gram flour, yogurt, and water in a blender. Blend until completely smooth. But be careful not to over-blend; only until you get a creamy batter.

Heat the oil in a big pot. Mix in the kadhi patta, cumin seeds, and ginger garlic paste.Combine the turmeric powder, Kashmiri lal mirch, and salt in a mixing bowl. Stir.

Cook for around 2 minutes after adding 1/4 cup water.

Bring to a boil, then reduce to a low heat and simmer for 2 to 2.5 hours, stirring occasionally.

The Pakoras are being prepared.

Add the gram flour, salt, and baking soda to a medium pot and stir thoroughly.

Gradually add water and stir until a smooth batter forms.

Heat the oil in a wok and fry the pakoras till brown and crispy.

Transfer the fried pakoras to the kadhi and cook for about 8 minutes on medium heat.

Add the oil, thinly sliced onion, and sauté until transparent in a frying pan.

Fry for a few seconds after adding the garlic.

Serve with rice or roti after adding the tadka to the kadhi pakora. 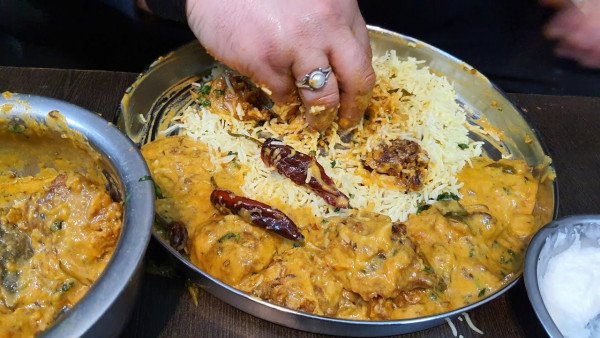 As the kadhi cools, it thickens. As a result, you may need to add a little water while re-heating. 5 to 10 minutes before serving, add the pakoras to the kadhi.