A Popular Dish In Pakistan : 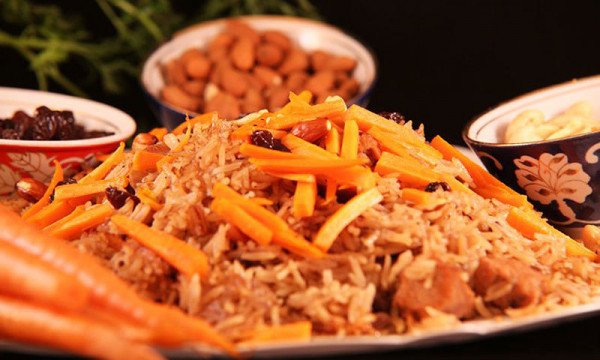 The dish is traditionally served in the middle of the table, with other items arranged around it. Due to the price and quality of the ingredients, as well as its history as Afghanistan's national cuisine. The cooking method and spices, on the other hand, are mostly unchanged. The subtle sweetness and crunchiness of fried carrots and raisins provide oomph to the gentle saltiness of the rice and meat, while the texture of almonds, pistachios, and cashews offer a richness to the flavor that is distinctive in taste and texture. Traditional techniques and fragrant spices are used to prepare it. Unlike its biryani cousin, Kabuli pulao is not hot and has fewer conflicting flavors while still being equally delicious. This delicious rice recipe is becoming increasingly popular in countries around the world, including Pakistan, India, and the Arabian Peninsula. It has certain similarities to Indian and Persian food, but it also has some distinct qualities. Many of the meals feature local fruits and nuts (particularly cherries, pomegranates, apricots, walnuts, almonds and hazelnuts), in the same way that Persian cuisine does. It is a more straightforward variation developed by Afghan immigrants in Saudi Arabia. Although lamb is traditionally used to make Kabuli pulao, chicken and other meats can also be used. Rice, as well as wheat, maize, and barley, are commonly used in Afghan cuisine. 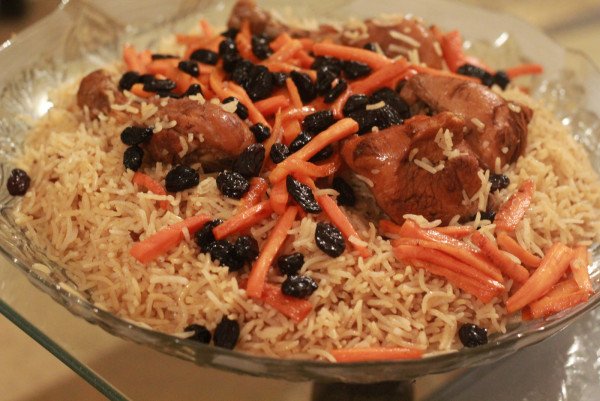 The Kabuli Pulao recipe is made by simmering long-grained basmati rice in a broth and the caramelized onions and chicken sauce turn the white long-grain rice into brown color. Underneath the rice, the meat is frequently covered or buried. Unlike other rice-based recipes, this fragrant Afghan food is baked and topped with thinly sliced fried carrots, raisins, finely cut orange peel strips, and chopped nuts and dry fruits such as cashews, walnuts, and almonds. Saffron gives the rice its flavor and color, but the spices are usually milder than in biryani. A beautifully sweet aroma comes from whole cardamom cloves and golden sultana raisins, sugar and in larger establishments, peanuts and even pistachios will be used as a garnish. There are many other pulao's in Afghanistan you may find delicious for example Narenj Pulao, Maash pulao, Alou Balou Pulao, Sherbet Pulao, Serkah Pulao, Yakhni Pulao, Zamarod Pulao, Bore Pulao, Landi Pulao, Bojan-e-Roomi Pulao. 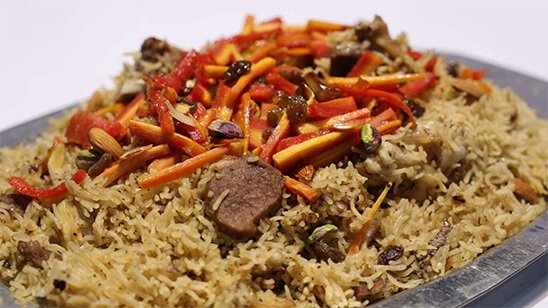